SeventhSide Games has just launched its first game “Beebble”, a city builder (a virtual town simulator) geolocalised at a junction between Farmville, Sim City and Foursquare, offering players the possibility to allow their virtual environment to interact with their real world location.

The game’s story was inspired by one of Albert Einstein’s theory, stating that the survival of humanity rests on the bees’ destiny: “If bees disappear from the planet, Man will only have four years to live.” 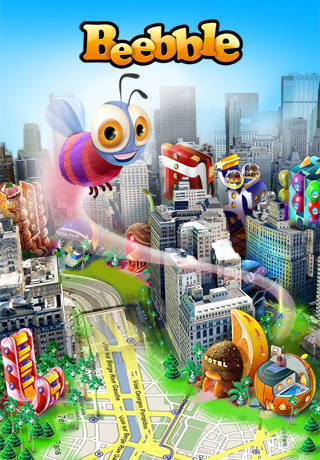 To save humanity the Professor Beebblestein, a crazy scientist, created a new genetically modified species of bees names the Beebbles, capable of communicating with humans. During the professor’s experiments, an explosion occurred, scattering the Beebbles contained in his incubator to all four corners of the world.

By downloading the free game, the players will be asked to explore real locations around them to uncover the Beebbles who may have found themselves there after the blast. As well as enticing players to discover new areas of their real world, the game pushes them to create communities for these bees by placing towns within the Beebble universe but positioned in the real world. These towns will then be developed by the players, as well as any new friends they may make within the game.

Thus, by saving the Beebbles, will humanity be saved as well?

After a Beta version with SFR (http://goo.gl/nuuxw) in July 2011 and a launch the on the French App Store, Beebble has just made its first TV appearance on StarPlayer, a show dedicated to video games, on the TV channel Direct Star. (http://www.youtube.com/SeventhSideGames ) It has now been released worldwide.

For our technophile friends, the game has the particularity to be entirely developed using HTML5. This allows it to be natively compatible with the width and breadth of web and mobile interfaces.

A few general bits of information on social gaming:

All games have, in the near future, the vocation to become social. The term social game is intrinsically linked to games broadcasted on social networks such as Facebook. The gaming mechanisms used in social games play a lot on the interaction between players (feeling of accomplishment, of competition…)

These games are less costly to produce than traditional games (on average 150000 euros) and generate several hundreds of millions of dollars for the more popular of them.

The games editor Zynga, leader of the market, has counted more than 80 million players on their game Farmville per month. Including all their games, Zynga counts more than 268 million active players per month on Facebook.

You will find attached more information on social gaming.

Here is also the link to a market study that we have undertaken a few months ago with extra figures to those already given in this message. (http://www.slideshare.net/Seventhsidegames/gaming-market-survey )

Sana Ali Khan is a IT Professional who works in a multi-national software house as Head of IT Department - in Karachi, Pakistan.

I like web designing, programming but most of all i am very passionate about writing and i really like people reading what i have to share with them.