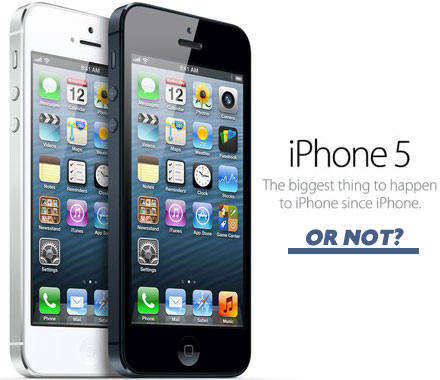 The question is, Were There Enough New Features with the iPhone 5?

The new Apple iPhone 5 was highly anticipated before its recent release. What features would be on this new device? Customers were obviously happy as Apple sold out its entire currently available iPhone 5 inventory in just one hour. While a taller screen, new panoramic function for the camera, and a thinner body was included, some are wondering though why certain features have gone missing. Were all the new features enough for the potential iPhone 5 buyer?

Apple has not included 3.0 USB on the iPhone 5. Instead, users will have to continue transferring their favorite movies and music using the decade-old USB 2.0 technology. If you look at the flash memory used in the iPhone, it currently isn’t even fast enough to utilize USB 2.0 speeds. Having a USB 3.0 interface would not be functional even if it was put in place. Users will have to wait to the future for this one.

Speculation was very strong that Apple would be integrating NFC (near Field communication) technology into the iPhone 5. NFC technology would allow the device to be used in transactions as a payment device. Apple’s Passbook app currently allows users to store digital versions of merchant cards, boarding passes and tickets. Most consumers figured incorporating NFC technology was the next step for implementation. This technology would also make swapping pictures or contact information with a friend more convenient. Imagine placing two iPhones close to each other and trading pictures with the touch of a few buttons.

It was reported before the release that Apple senior VP Phil Schiller was not in favor of replacing the USB cord with a wireless charging option. While an iPhone user can currently charge their phone at the nearest computer, wall outlet, or airplane, if they’re at a convention or event with a limited number of wall outlets, wireless technology would come in handy. If wireless charging was implemented the unit would become a thicker device. Possibly Apple is working on a wireless charging case. This would keep the iPhone thin and that’s a top priority with this Apple device.

It definitely wasn’t one of the high priority features that consumers were hoping for, but incorporating biometric security was on some users wish lists. This cool feature would allow the user to unlock their phone without using a password. Simply swipe your finger across the screen and you’re good to go.

Slipping a micro-SD card in and out of your favorite devices is convenient and easy. While an expandable memory option would be convenient to have on the iPhone, the chances are pretty slim that Apple will be implementing this feature in any future iPhone devices. Apple prides itself on the structure and beauty of its products. For the same reason we won’t see wireless charging, Apple will focus on keeping the iPhone thin and expand the inner memory for users.

While some iPhone enthusiasts were slightly disappointed that the implementation of a few new features weren’t included, this device is sure to be a big seller for Apple.

Did you get your hands on the new iPhone 5? Please share your thoughts.

Kathleen Hubert is a blogger who writes on a variety of different sites.
Check out more of her work at LaptopComputers.org OR

The most interesting mobile devices released in 2011!