Dragonball Z Anime – Goku and Friends are Back! 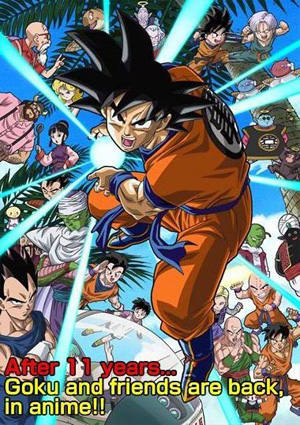 I just can’t believe this – i actually found something that i thought i would never see again – a new episode of my all time favorite anime Dragonball Z.

This new episode is presented by JumpLand.

One sad news is that its not in English dub – only English subtitles (but its better than nothing right?)

The episode is set 2 years after the defeat of Majin Buu and Satan (Hercules) is holding a huge festival rewarding himself for nothing. But the good thing about all this is that we get too see the return of the entire cast of Dragonball Z from the obvious Goku to the more obscure Oolong. Hilarity is every where and rampant. This episode brings a couple of new surprises in store for us. Along with new surprises, it certainly brings back a lot of long lost nostalgia for the series that made Anime the thing to be in America during the mid-90’s. This episode has great modern updates in animation and just as fun as ever to watch. Although this episode seems like a filler more then an actual episode that adds on to the Universe of the Dragonball Z, it is still a gem that reminds their fans how great a series this show was. As the episode comes to an abrupt closing, not withstanding all the great fight scenes that precedes this, there is a small urge that begins to swell up as you wish that Akira Toriyama made more of these little shows for us. But alas it ends here my friends.

If you wish to watch this new episode you have two choices either visit Jumpland’s Website to watch it  or Click Here to download the New Dragonball Z Episode.