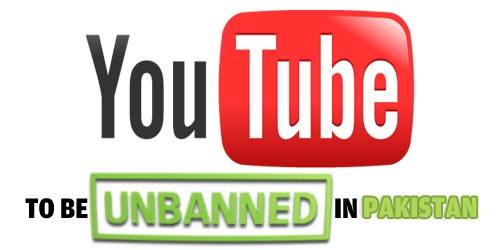 Chairman Pakistan Telecommunications Authority (PTA) Farooq Awan has stated that the popular video sharing website Youtube will be unblocked and back in service to the entire nation of Pakistan in the upcoming 15-20 days.

They are saying that talks are currently being made with Google, who is the owner of Youtube, to remove the blasphemous content from their video sharing website.

Youtube was banned in Pakistan 3 months ago in September 2012 following widespread outrage over the anti-Islam film. It has remained so from there on, while users have still had access to the video sharing website but it was through means of third-party services such as Proxies and VPN’s; Though those that did not have any idea on how to use these services were left out and even those who had access to these type of services can’t enjoy Youtube, since their browsing speed degrades automatically when using these type of third-party services.

It is obvious that Google is loosing business from this, but “we” the people are also at a great disadvantage by blocking such a popular service, it was however inevitable and a necessary action that needed to be done to calm and control the situation in Pakistan.

Update – December 04th, 2012
According to the latest news, Director General of Pakistan Telecommunication Authority (PTA) Farooq Awan takes back his own words and says that there has been no decision to unblock YouTube nor was it officially opened.

Farooq Awan said the PTA would investigate those Internet Service Providers (ISPs) who opened the video sharing website in some cities of Pakistan on Monday.

So according to him also, some of the internet service providers in Pakistan have already started unblocking YouTube. But he wasn’t done there as he also added that action would be taken against the ISP’s which opened YouTube and their licenses could be suspended.

Lets see how well this turns out be, please comment below and let us know your opinion regarding this announcement made by PTA 🙂

Since there is not much news on when YouTube is really going to be unblocked in Pakistan, we have decided to write some articles in which we show you how to unblock YouTube, Facebook or any other website you are having trouble accessing due to censorship.

Update: Youtube to be unblocked in 24 hours, tweets Malik

Federal Interior Minister Rehman Malik has said that a decision has been taken to unblock YouTube website within 24 hours following ‘a great demand’.

In a message tweeted on Friday (Dec 28th, 2012); Rehman Malik said that he chaired a high-level meeting with all stakeholders on youtube issue. He said that notification in this regard is likely to be issued today. Malik further said that those who had been pressing him to unblock the site should be happy now.

Youtube was unblocked and made accessible on 12/29/2012, but only for a short while after the PTA ordered all ISPs and IT sectors to unban the Youtube website. But surprisingly moments later the Prime Minister of Pakistan ordered to re-blocked the video sharing website, once again.. and it has been since remained inaccessible.

Sana Ali Khan is a IT Professional who works in a multi-national software house as Head of IT Department - in Karachi, Pakistan.

I like web designing, programming but most of all i am very passionate about writing and i really like people reading what i have to share with them.